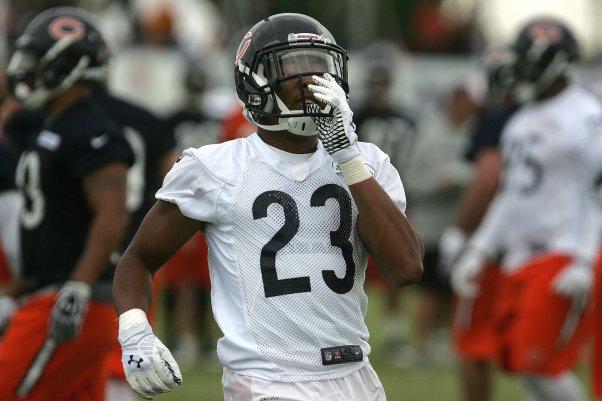 The Bears continue to fight in training camp, this time it was Martellus Bennett‘s turn to retaliate against Bears first round pick Kyle Fuller after a potentially excessive hit nearly brought the tight end to the ground.

While Bennett’s body slam of Fuller was mildly impressive, Fuller’s willingness and fearlessness to mix it up with a much larger offensive player shows that he is not the least bit intimidated entering his first year in professional football.

Martellus Bennett is 6-foot-6, 265 pounds while Kyle Fuller is 5-foot-11, 190 pounds, not exactly a fair fight.  The video below is courtesy of Comcast SportsNet Chicago:

While the coaches do not want players to take each other to the ground in practice, Kyle Fuller was supposedly trying to strip the ball from Bennett and does not bring him all the way to the ground.  Bennett, however, risks seriously injuring the Bears No. 1 pick with his uncalled for body slam.  While a lot of fans enjoy watching fights in practice, this kind of incident has the potential to do more harm than good when it risks the health of an important piece of a revamped defense.

With that said, you can’t help enjoying the competitive edge the Bears are displaying at practice.  Watching video of the skirmish only makes fans crave actual football games that much more and I’m sure the players feel the same way, which may be the reason these types of fights happen in the first place.

UPDATE: The Bears have fined and suspended Bennett for conduct detrimental to the team:

While most football meatheads enjoy fights in practice, Mark Trestman is not among them and he has made that perfectly clear through this suspension.  Bennett was seen jawing with Brandon Marshall after the play and this type of behavior is not going to help team chemistry, at least as far as the offense is concerned.

The fact of the matter is that the Bears need Martellus Bennett this year, even more so after Marquess Wilson broke his clavicle, depleting Jay Cutler’s stable of targets.  Hopefully this will serve as a wake-up call to Bennett and the team can move on and prepare for actual games.

The Bears will play their first preseason game on Friday, hosting the Philadelphia Eagles at Soldier Field.