Looking back at Darwin Barney after Cubs designate him for assignment 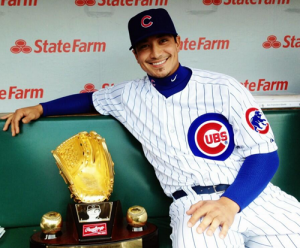 Before yesterday’s game the Cubs finally put Darwin Barney out of his misery by designating him for assignment in order to clear up a roster spot for Emilio Bonifacio who returned from the disabled list.

Barney was one of the longest tenured Cubs, having come up in August of 2010 after leading all of Triple-A in hits with 142 that season. Barney had never been on top prospect lists and his call to the Cubs came as somewhat of a surprise.  It was even more of a surprise though, when Barney stuck as a starter with the team beginning in 2011 when he became the regular second baseman.

As a shortstop throughout the minor leagues and in college, Barney became an excellent defender at second base and when combined with his high-contact approach at the plate, Darwin Barney began to prove himself as a capable starting caliber player in the Major Leagues.  While his 2011 slash line of .276/.313/.353 wasn’t overly impressive, Barney’s stats that year seemed to lay a decent baseline from which he could improve.

However, in 2012 Barney’s offensive production took a hit despite an improvement in both his walk rate (5.6 percent) and strikeout rate (9.9 percent).  Due mostly to a drop in BABIP from .310 in 2011 to .273 in 2012, Barney’s overall line fell to .254/.299/.354.  While Barney failed to produce at the plate, all was forgotten every time he made a spectacular play in the field. With a well-deserved Gold Glove award to show for it, Barney again appeared to be a legitimate starting second baseman in the league.

However, in 2013 Barney’s offense took another nosedive.  The lack of offensive production could partially be attributed to another fall in BABIP, this time down to .222, but without the ability to find holes in the field Barney became a black hole offensively.  His defense remained elite and while Barney’s future with the team was far from assured, he still appeared to be a capable starting second baseman on a strong offensive team.

Instead of showing any kind of improvement though, Barney’s production has continued to slide in 2014 on both offense and defense.  His walk rate is at a three-year low (4.1 percent) while his strikeout rate is at a three-year high (14.3 percent) and his on-base percentage of .265 is at an all-time low.  While Barney is still an excellent defender, he has not been quite as slick in the field as in year’s past.  When all of this is combined with the Cubs burgeoning wave of infield prospects, it was simply time to move on.

Barney became eligible for arbitration last year and both sides settled for a salary of $2.3 million in 2014.  That salary is only going to escalate in 2015, making Barney a likely non-tender candidate for the Cubs in the offseason.  It would have been ideal for Barney to stay on the team as a bench bat and defensive ace, but it just doesn’t make sense to retain him in that role for $3+ million.

Darwin Barney’s time with the Cubs was already ticking away and this just made it official.  By designating Barney for assignment, the Cubs opened up a necessary roster spot and gave themselves 10 days to find him a new home.  Hopefully Barney can latch on with a contender and will finally feel what it’s like to play meaningful games down the stretch and into October.

As for the Cubs, this was a necessary step in building the foundation of a contending team.