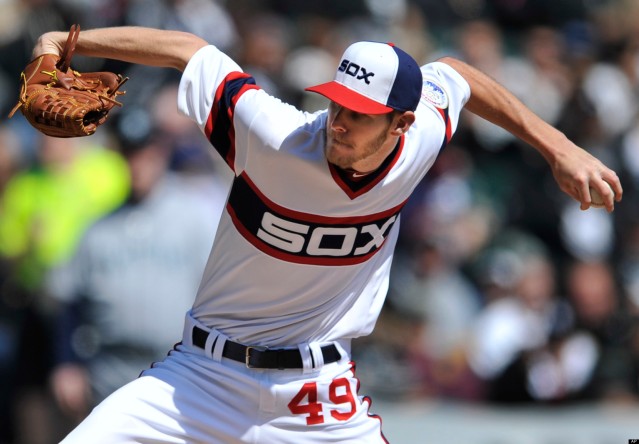 This comes straight from Fan Graphs:

Speaking of crazy cheap players in Chicago, Chris Sale is basically Yu Darvish if you extended his deal for an extra three years. Or Felix Hernandez, if the Mariners were also subsidizing 60% of his remaining contract. Sale is right there with the game’s best pitchers, only he’s earning about one-third of what elite pitchers make these days and he has no real chance for a significant raise any time soon.

Or, I’ll put it this way. If a team had a choice between Clayton Kershaw and Chris Sale over the next five years, the money they’d save by choosing Sale would allow them to also afford Adam Wainwright. And that’s why Sale is the most valuable pitcher in baseball right now.

Tomorrow, we’ll wrap this thing up with the top 10. Get ready for a run of truly great position players. As preparation, here is the published list to date.

Chris Sale is just plain exciting to watch.  It’s impossible to not think of Randy Johnson as Sale whips his left arm towards the plate at a low-3/4 slot.  To quote an earlier post,

Chris Sale continues to be one of the top three pitchers in baseball.  Sale has incredibly lowered his walk rate yet again this year to a minuscule 1.52 BB/9, having lowered it each consecutive season since entering the league in 2010.  Also, for the second consecutive year Sale has raised his strikeout rate which is now at 9.66 K/9, giving him an incredible K/BB on the season of 6.38, by far a career high.

The White Sox are skipping Sale in the rotation coming out of the All Star break, which will give him a total of 11 days rest between starts.  The specter of injury is perpetually hanging over Sale given his slight frame, but other than a couple of minor issues here and there, Sale has stayed both healthy and insanely effective.